ohn McCullough got a chilling look into the horrors of coronavirus while he worked as a contact tracer for a health department in Alexandria, Virginia.

So he did his part to keep himself and his community safe: mostly stayed home, wore his mask and had only a close group of people he interacted with. 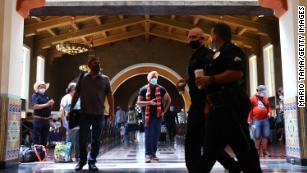 👀lIntégrez automatiquement au groupe whatsapp pour recevoir les liens des actualités 😍 ACTUALITE via Telegram
Many Americans were looking forward to a carefree summer. But Covid measures are creeping back into our reality
He got vaccinated as soon as he could and was enjoying a return to the normalcy he had longed for. As Covid-19 vaccinations climbed in the spring and cases plummeted, local and state leaders did away with mandates and restrictions meant to curb the spread of the virus. Experts touted that Americans who got their shots could cautiously return to pre-pandemic activities. The Centers for Disease Control and Prevention announced fully vaccinated people could — finally — shed their masks.
“I was one of those people, the second the CDC said vaccinated people don’t need masks outdoors or indoors, I was like ‘Hallelujah,'” McCullough told CNN.
But with Covid-19 cases and hospitalizations now surging again and officials across the US suddenly reimposing restrictions after a summer of semi normalcy, McCullough and many other vaccinated Americans are becoming increasingly angry at those who are refusing the shot.
“I did what I had to do,” McCullough told CNN. “Now, these people who are making this selfish decision are going to make me suffer the consequences.” 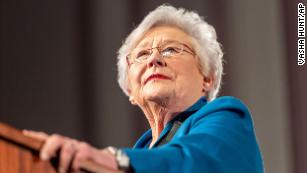 Alabama Republican Gov. Ivey says ‘start blaming the unvaccinated folks’ for rise in Covid cases
The average number of new cases daily is up more than 400% since last month. Hospitals are again filling with Covid-19 patients — many younger than ever before, and most unvaccinated. Mask mandates are back in parts of the country. And this week, the CDC updated guidance it issued in May and said fully vaccinated people should wear masks indoors in areas with “substantial” or “high” Covid-19 transmission to prevent further spread of the dangerous Delta variant. More than 80% of the US population lives in a county impacted by that guidance.
In Alabama –– the least vaccinated state in the country — Gov. Kay Ivey called out residents who are refusing to get their shots, saying “it’s time to start blaming the unvaccinated folks” for the rise in cases in her state.
In Alexandria, where McCullough lives, roughly 58.4% of residents 12 and older are fully vaccinated. The city was “elevated to a state of substantial COVID-19 community transmission,” according to a city news release. Health officials there are urging residents to wear masks in public indoor settings. Virginia Gov. Ralph Northam made the same recommendation to residents Thursday, adding that “getting vaccinated is the surest way we can bring this pandemic to an end.”
McCullough says he’s now back to bringing his mask with him when he goes out and worries his community could soon face a fresh round of strict restrictions.
““The repercussions are going to fall on people like me, that took responsibility,” he said. “And that’s infuriating.” 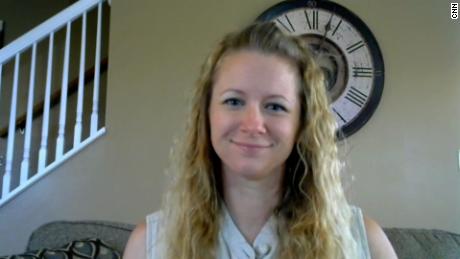 See what this former vaccine skeptic credits for changing her mind 02:35

‘It just feels like it’s not going to end’

Roughly 57.4% of the US population has received at least one dose of a Covid-19 vaccine and roughly 49.5% is fully vaccinated, according to CDC data. Much like face masks, the vaccines became highly politicized in some parts of the country, resulting in vastly different coverage rates. And vaccine hesitancy and refusal were fueled by misinformation and falsehoods that continue to run rampant online.
Areas with low vaccination rates are now seeing dangerous outbreaks.
Average Covid-19 hospitalization rates are nearly three times higher among states that have fully vaccinated less than half of their residents compared to the average among those that have vaccinated more than half, a CNN analysis of federal data found. And Covid-19 case and death rates over the past week were on average more than twice as high among states that have vaccinated less than half of their residents.
President Joe Biden this week said the pandemic rages on “because of the unvaccinated.”
“If you’re not vaccinated, you’re not nearly as smart as I thought you were,” Biden said. 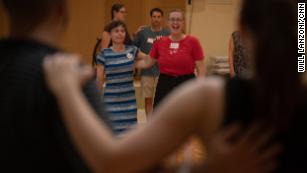 ‘I don’t feel any fear going out.’ How residents are living in America’s most vaccinated state
With increasing concern over the climbing Covid-19 numbers, some local leaders have reimplemented mask mandates for everyone, regardless of vaccination status. Late Wednesday, Atlanta Mayor Keisha Lance Bottoms issued an executive order requiring everyone to wear a mask when indoors, citing CDC guidance.
Tim Hildreth, 39, who lives in nearby Powder Springs, said it’s frustrating to feel like he’s slipping back out of the normalcy that he briefly got a taste of after he was vaccinated.
“I’m done with these mandates to protect people who won’t go out of their way to do it themselves,” Hildreth said.
He said he worked from home during the pandemic, and his young daughter was always masked up when she went to school. Hildreth got the vaccine because he was eager to go back to a pre-pandemic lifestyle and be able to attend concerts and sports events.
But now, amid a fresh surge, he says, “it just feels like it’s not going to end.”

Expert: It makes sense to be angry with returning guidelines

Experts say it’s expected many will feel angry with returning mask measures.
“It’s very hard to pull the finish line away from somebody when it feels like they finally have the ribbon at the end in sight,” American Psychological Association chief science officer Mitch Prinstein told CNN.
“I think we can also understand the anger in the context of exhaustion, anxiety, uncertainty, and you know, a serious division of ideology too,” Prinstein added. “These factors are very real and very concerning right now.” 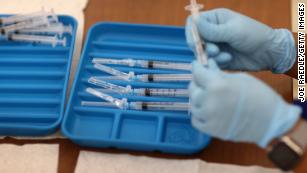 Vaccine mandates are politically risky, but may just work
Jenny Tolford, who lives in a rural northern California community, said the thought of not being able to go back to normal any time soon is “exhausting.”
“It looked like we were starting to get a handle on it,” Tolford said. “It’s just frustrating, it’s exhausting, to feel like we’re just going backwards and we’re just kind of, now it just seems like, we’re just circling the drain.”
Tolford said that while she has gotten the vaccine, Covid-19 measures and vaccinations are a point of division in the largely conservative community she lives in. There are residents who will “shame you for wearing a mask,” she said, and others who have gotten the vaccine “talk quietly about it.”
Covid-19 vaccine refusal has grown among far-right Republicans in the past few months, according to survey data published Wednesday by the Public Religion Research Institute and the Interfaith Youth Core. About 46% of Republicans who most trust far-right news said they will refuse to get vaccinated, up from 31% who said the same in March.
Refusal to get vaccinations in her community, Tolford said, is being fueled by misinformation on social media.

While Tolford said she understands people’s feelings about being forced to take a shot, she said a lot of people view their decision to refuse as a “Constitutional-like freedom,” when, really, it’s a communal public health issue. 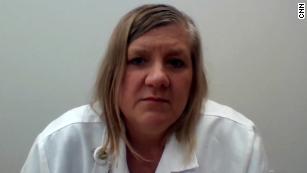 Some people in Missouri are getting vaccinated in secret to avoid backlash from loved ones, doctor says
“Why should those who don’t seem to want to do what’s best for the public now get to just benefit from being open again, while they also just spread Delta variant around?” she said.
“Those of us who got vaccinated, we want to live our lives,” Tolford said. “The way to do it was to get vaccinated and we’ve done it and now you guys still don’t want to put other people first and put the greater good of society first, so maybe you guys need to just go stay home. Maybe it’s time for you guys not to be able to do everything because you don’t want to participate.”
Tolford said she supports the idea of vaccine passports and would also support vaccines being mandated by employers. Some companies — including Google and Facebook — have already announced vaccine requirements for their employees. President Biden announced on Thursday a requirement that all federal employees be vaccinated against Covid-19 or face strict protocols.
Hildreth and McCullough also support the idea of businesses mandating vaccines.

Vaccinate all health care workers now
“Personal liberty is really exaggerated in this country, to the point where people are just flat out being put in danger,” McCullough said. “That people think that they have this authority, and this autonomy, to just put others at risk, is infuriating.”
He said he worries about the virus continuing to mutate and eventually becoming much worse than the current circulating variants.
“It’s not freedom that you make this decision that then impacts my freedom,” he said. “That’s not freedom one bit.”

CNN’s Jen Christensen and Deidre McPhillips contributed to this report.