Himes was at the residence of an ambassador with two Republican lawmakers on Tuesday for dinner, just hours after police officers gave explosive testimony about fearing for their lives on January 6 during the Capitol Hill insurrection, when the ambassador asked the group what it was like to be in Congress during the insurrection.
« I’m usually the conciliatory person but I just said ‘screw it,' » Himes recalled to CNN, sharing that he could not refrain from calling out his Republican colleagues in that moment.
« I’m not going to sit here and say anything other than what we all know happened, » Himes added. « I just said, you know, I will never forgive the President for so damaging our democracy and it’s been very, very hard to watch my Republican colleagues collude in this big lie. »
After that, Himes said there was a « very long awkward silence. »
In the direct months after January 6, tensions between members of Congress were at an all-time high. Many lawmakers refused to work with those who did not vote to certify the presidential election and the installment of the metal detectors off the House floor bred distrust and resentment. 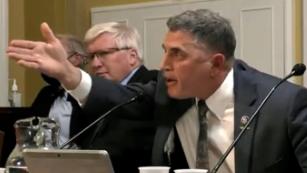 Republican Rep. Andrew Clyde evading House mask fines, GOP colleague says
On the Senate side, thawing tensions had slowly become more evident, culminating in the bipartisanship shown in the recent vote to advance the $1 trillion infrastructure package where 17 Republicans joined Democrats.
But on the House side, the last two weeks have put into sharp focus that tense dynamics have gotten worse. The creation of the select committee to investigate the January 6, which pitted House party leadership against each other and put members’ previous positions on the attack back in the forefront, followed by a mask mandate being reinstated, has infused a level of rage through the hallways of the House that has poured gasoline on an already scorching working relationship.
« Especially for people who have experience and a history of working with each other across the aisle, I felt like things were finally starting to thaw » a Democratic aide, reflecting on the last few months told CNN. « Unfortunately, now it feels like that came to a halt this week. »
The staffer cited the pushback over having to again wear masks and the reality that some lawmakers were not moved by the testimony from police officers at the select committee hearing as the sources of the new tension.

Just days before his confrontation with his Republican colleagues at the residence of an ambassador, Himes had fallen in the crosshairs of yet another example how political brawls are affecting unrelated business in Congress.
Shortly after he was appointed to serve as chair of the select committee on Economic Disparity and Fairness in Growth, Himes found out that none of the Republicans initially announced to serve with Democrats on the committee would be joining. Minority Leader Kevin McCarthy had retracted his selections to the key select committee on the economy because he was still upset that House Speaker Nancy Pelosi rejected two of his picks for a much more contentious select committee: the one investigating the January 6 riot.
« It’s disappointing to me obviously that we got caught up in the whole January 6 committee issue because we are obviously totally, totally separate from that, » Himes told CNN.
Himes said he had spoken with McCarthy about his intentions for the select committee ahead of the announcement and got no indication that McCarthy would pull back his appointments until it happened. Although he says he has not spoken to McCarthy since the decision to remove Republicans from his select committee was made, hoping to let « tempers settle, » Himes told CNN he plans to reach out to Pelosi and McCarthy about finding a way to « insulate » the committee from being derailed by future political fights.

‘I wish we weren’t going down this road right now’

Earlier this week, a routine Rules Committee meeting turned into a viral back-and-forth over how members talk about the January 6 insurrection.
Chairman of the Committee on Rules Jim McGovern, a Massachusetts Democrat, pleaded for members to stick to the topic at hand as partisan fights started brewing and detracting from members’ work.
« I wish we weren’t going down this road right now, » McGovern said. « We’re now prone to too many generalizations here that paint people here with a broad brush that is inaccurate. And I think if we want to get back to a time where we can actually find common ground, we all got to kind of cool it a little bit. »
But things reached a fever pitch when Democratic Rep. Jamie Raskin of Maryland, who serves on the select committee investigating the riot, utilized part of his time to rail on GOP Rep. Andrew Clyde and pin him down on whether he still stands by his previous comments of calling scenes of the January 6 « a normal tourist visit. »
Many members called for order, but Raskin pushed to get Clyde to admit that he did not regret his previous statement characterizing January 6 as « a normal tourist visit » even though Clyde refused to concede that by extension he was calling the rioters from that day tourists. 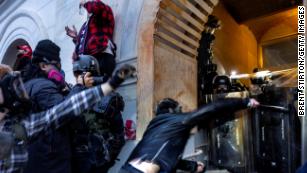 👀lIntégrez automatiquement au groupe whatsapp pour recevoir les liens des actualités 😍 ACTUALITE via Telegram
Republicans have downplayed the US Capitol riot violence. The evidence paints a different picture.
The mask mandate being reinstated in the House has only infused another fiery level of resentment between the two parties.
Lauren Boebert threw a mask at a floor staffer when she was intercepted trying to walk onto the House floor without one. Republicans forced multiple procedural delays on the House floor to protest the new mask mandate. Many in the GOP railed against guidance from Capitol Police on Thursday that said staffers and visitors could be subject to arrest for evading mask rules, even though that exact language was used in a similar release obtained by CNN that went out last year.
The House Republican Freedom Caucus held a press conference pressuring McCarthy to bring a resolution to the floor to remove Pelosi from her chair. Many of them later walked back and forth between the House and Senate without a mask to highlight that the mask guidance is different between the two chambers, and protest its use in the House.
And above all, the rhetoric has reached a screeching new pitch.

It starts at the top

McCarthy said he did not watch the select committee’s first hearing investigating January 6. When Pelosi was asked about that by CNN, she shot back, « anytime you mention his name, you’re not getting an answer from me. Don’t waste my time. »
After McCarthy framed the new mask guidance in the House as « a decision conjured up by liberal government officials who want to continue to live in a perpetual pandemic state » Pelosi told reporters, « he’s such a moron. »
Rank-and-file members have also taken shots at their opposing side.
When McCarthy came to the House floor to rail against the new mask mandate and call into question the science and logic behind the decision, Democratic Rep. Tim Ryan gave an impassioned floor speech calling McCarthy’s reasoning « immature and appalling » and ultimately « beneath a minority leader of one of the major political parties in the United States of America. »
GOP Reps. Ralph Norman of South Carolina called Pelosi a « disgrace, » Jody Hice of Georgia described Pelosi’s leadership as « draconian, authoritarian reign, » and Andy Biggs of Arizona said her « tyranny knows no bounds. »
Democratic Rep. Adam Schiff tweeted of McCarthy on Thursday, « if anyone thought that the deadly incompetence of the GOP ended when Trump left office, Kevin McCarthy proves otherwise. He mirrors the anti-science, anti-truth mentality of the former president. For our democracy’s sake, and our health, he must never become Speaker. »
Democratic Rep. Jared Huffman got in a yelling match with GOP Rep. Byron Donalds because Donalds, who told reporters he is not vaccinated, refused to put on his mask.
Huffman, wearing a mask, said Donalds was selfish for not wearing a mask, but Donalds responded, « Don’t be worried about me! Mind your business! »
GOP Rep. Chip Roy, one of many right-wing Republicans to not wear a mask in protest on Wednesday who has tried multiple times to get the House to adjourn this week said on the House floor, « this institution is a sham. And we should adjourn and shut this place down. »
Some are hoping that the House heading towards a seven-week recess will help these tensions simmer.
« Thankfully we’re all going home on August recess in a couple of days, and we’ll get a little rest from all this, » said GOP Rep. Mike Johnson of Louisiana.
-- Publicité