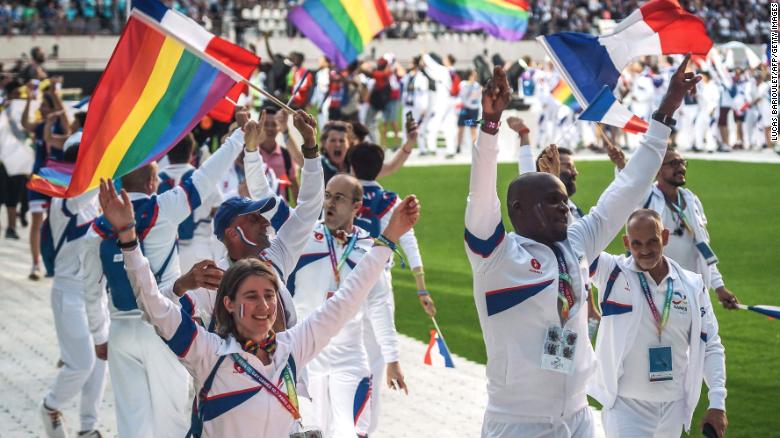 Tom Waddell knew what to expect from an Olympics opening ceremony. He’d experienced one before as a decathlete at the 1968 Mexico City Olympics. He remembered the parade of athletes from around the world, proudly marching alongside their flags before an audience of thousands, cheering on their every move.

His gay and lesbian friends in San Francisco, though, had never experienced an event as thrilling or moving as the opening ceremony. According to various archives, he wanted to share with them the awe and the connection he felt in that moment, and thought that maybe, while they basked in the glow of the applause, the rest of the country might recognize their humanity.
And so Waddell created the Gay Games — then called the Gay Olympics, until the International Olympic Committee sued over the name. He saw his games as a vessel for change, a venue for activism and a celebration of LGBTQ inclusion.
« The formula for success was visibility and identity, » Waddell said in an interview following the first Gay Games in 1982. « And both were right there on the field. We were visible, and we were identified. And what did people see? They saw healthy people, out there, doing something that everyone could understand. They were out there to compete and have fun — success. That’s what the first Gay Games were all about. » 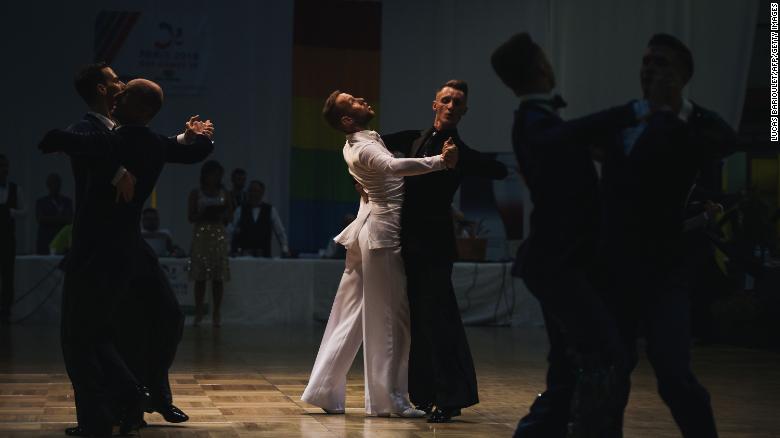 👀lIntégrez automatiquement au groupe whatsapp pour recevoir les liens des actualités 😍 ACTUALITE via Telegram
Participants compete in the dancing event of the 2018 Gay Games in Paris.
Waddell died in 1987, but the Gay Games continue to this day, growing into an international phenomenon since their first iteration. They draw over 10,000 athletes and sometimes seven or eight times as many spectators, said Shiv Paul, vice president of external relations for the Federation of Gay Games. They feature many of the same sports traditionally seen at the Summer and Winter Olympics — figure skating, track and field, diving — with additions like bowling, e-sports and dodgeball.
You don’t have to be a professional athlete — even a proficient one — to compete in the Gay Games. You don’t even have to be gay. And unlike at the Olympics, activism is encouraged at the Gay Games, as it has been since the beginning when the HIV/AIDS crisis was ravaging LGBTQ communities. Above all, though, the Gay Games are an event for queer and trans people to gather safely, play sports they love and be themselves without fear of intolerance.

The Gay Games sprung from activism

The first Gay Games were held in San Francisco in 1982, where transmission of HIV had peaked among the city’s bustling gay community. The « epicenter » of HIV/AIDS cases was San Francisco’s Castro neighborhood, where Waddell, who was also a physician, operated a private practice.
Waddell was inspired by American athletes Tommie Smith and John Carlos, who, at the 1968 Olympics that Waddell had attended, raised their fists in protest against racism after medaling in the 200-meter sprint. 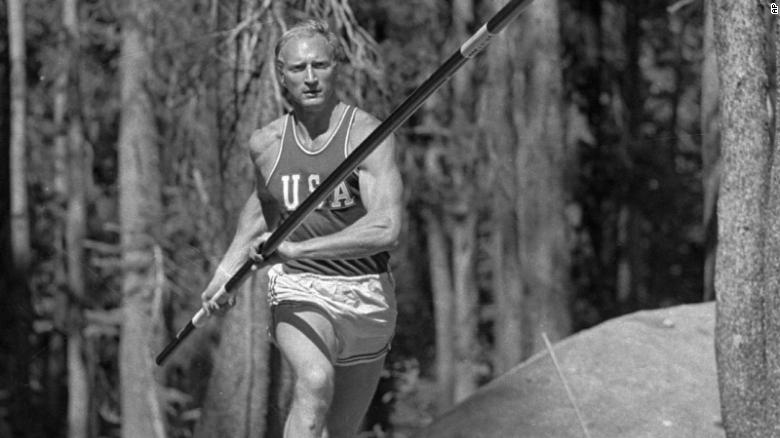 Tom Waddell, pictured competing in the Olympic decathlon finals ahead of the 1968 Olympics, founded the Gay Games to foster joy and belonging among LGBTQ people.
The Gay Games could be an act of protest then, too, Waddell decided, an event during which LGBTQ people could play the same sports they watched during the Olympics and achieve the same kind of glory he had at the 1968 Olympics. He also hoped that the Games would humanize LGBTQ people to spectators.
« The games are really not about athletics, » Waddell said in an interview. « They’re about a statement on the quality of our lives. »
HIV/AIDS awareness has been baked into the Gay Games since its inception: In addition to banning discrimination based on gender, sexuality, race and other traits, the Gay Games wouldn’t allow any participant to be turned away based on their HIV status. The Gay Games also successfully lobbied the US government to briefly waive a previous ban on HIV-positive people entering the country so they could compete in the 1994 Gay Games in New York and in the 1996 Olympics in Atlanta, changes made with the help of the US Olympic Committee.

The Games are open to all

Anyone can participate in the Gay Games — really, just about anyone. Athletes just have to pay to play, Paul said.
Though Waddell emphasized that sports weren’t the central focus of the Gay Games, the event has hosted athletes with real prowess. Swimmer Jim Ballard set a world record in the 100-meter backstroke in 2002 at the Sydney Gay Games. Powerlifter Chris Morgan began his career at the Gay Games and went on to win another 30 medals at various world championships. 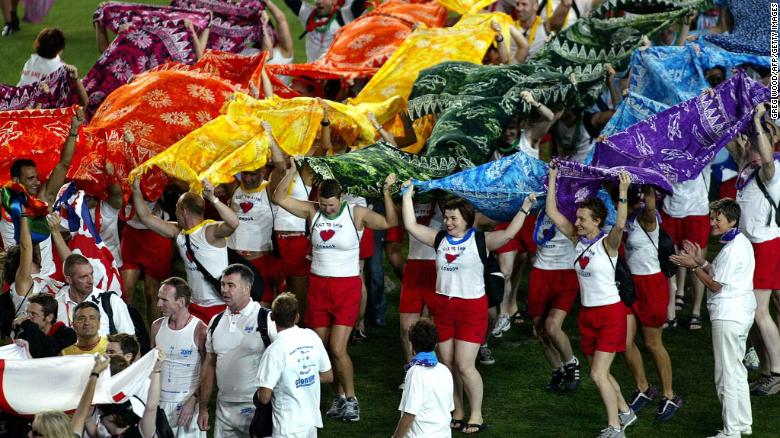 Participants from the United Kingdom team march onto the field during the opening ceremony of the 2002 Gay Games in Sydney, Australia.
« The beauty of the games is you can participate in a sport like powerlifting as a newbie in the same environment as Chris, » Paul said. « You can’t do that in the regular Olympics. »
And unlike the « regular Olympics, » at the Gay Games, a same-sex figuring skating pair can don matching denim jumpsuits in a performance set to « Hopelessly Devoted to You. » A trans basketball star from Uganda, where same-sex activity is still criminalized, can lead his team to victory. And it’s where a 65-year-old, HIV-positive athlete can run a marathon, more than 20 years after AIDS nearly killed him.
The Games also host events in areas where LGBTQ rights are challenged to prove « that the LGBTQ communities are nothing to be afraid of, » Paul said. The upcoming Gay Games will take place next year in Hong Kong, where same-sex marriage is not legally recognized.
« We preach acceptance candidly, » he said.

The Gay Games go on

The opening ceremony of the first Gay Games was the stuff of Waddell’s dreams. More than 1,300 athletes from around 170 cities waved their flags with joy. Tina Turner, the « Queen of Rock ‘n’ Roll » herself, performed. After the event, Waddell said the spectators left with « blisters on their hands » from clapping so rigorously.
« You have to have been there Saturday to understand the feeling because to describe the feeling of pride would never work, » Bay Area Reporter columnist Wayne Friday wrote of the opening ceremony.
The gravity of that moment — of seeing so many queer people in one place, celebrating and being celebrated– caused many of those in attendance to weep, said Waddell, who wept along with them. 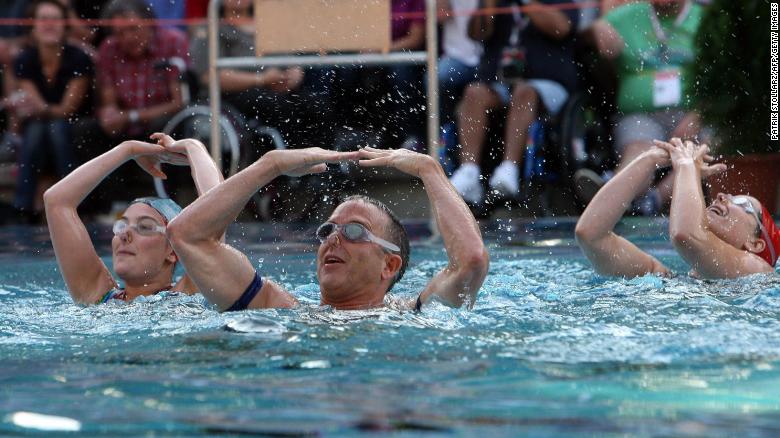 A team performs in the freestyle competition of the waterballet event of the 2010 Gay Games in Cologne, Germany.
« Up until opening day ceremonies, I think I was the only person who knew what was going to happen, » Waddell said. « And it happened. The dream became a reality. »
Waddell died of AIDS in 1987, one year after the second Gay Games, but the Games and his dream for their impact have only grown since. Participation in the Gay Games steadily grew every year it was held, and in 1994, at the New York Gay Games, the number of participants exceeded the number of athletes at the 1994 Winter Olympics. The 11th Gay Games, to be held next year in Hong Kong, will likely see at least 10,000 participants.
The opening ceremony of the Gay Games is still emotional all these years later, Paul said, especially when participants from countries where homosexuality is not accepted march in the Parade of Nations.
« What we provide for that week of the year when the Games are being held is a safe space, where they can be their authentic selves for every second that the Games is on, » he said.
If you go back to ancient times, the Olympics have a few centuries on the Gay Games. But if the last few decades of freedom and fun at the Games are any indication, the Gay Games will have a long, storied run.
-- Publicité