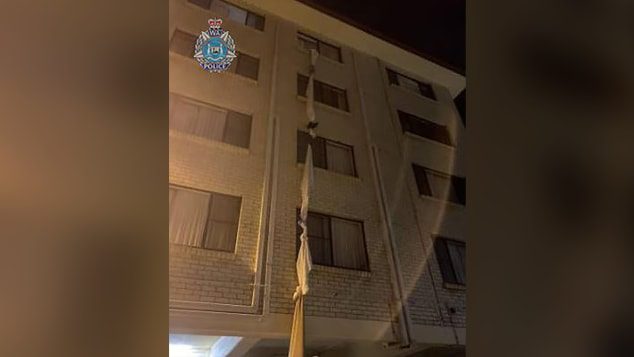 Which countries are tightening their Covid corsets and which are letting it all hang loose? CNN Travel reveals all in our latest weekend round-up.
Here’s what we learned in pandemic travel this week:

1. It’s all kicking off in Australia

direction to return to Queensland. » />

👀lIntégrez automatiquement au groupe whatsapp pour recevoir les liens des actualités 😍 ACTUALITE via Telegram
A man who’d arrived in Western Australia from Brisbane was arrested and charged after he fled his hotel room while under direction to return to Queensland.
Western Australia Police Force
First, controversial British media personality Katie Hopkins was deported from Australia for breaching quarantine and bragging about it on Instagram.

Then Airbnb suspended an anti-vax host in Victoria for refusing accommodation to a couple because they’d had their Covid-19 vaccine jabs.
On the same day, news broke that a 39-year-old man had allegedly used a rope made from bed sheets to shimmy down from a fourth-floor hotel room and flee quarantine in Western Australia.
Then on Friday, the Australia-New Zealand travel bubble burst.
Because Australia’s Covid outbreak continues to spread, quarantine-free travel from all Australian states and territories to New Zealand will be now be suspended for at least eight weeks, New Zealand Prime Minister Jacinda Ardern and Covid-19 Response Minister Chris Hipkins announced on July 23.

2. A Covid-positive man disguised himself as his wife in order to fly

A Indonesian man who’d tested positive for Covid-19 was caught mid-air after disguising himself as his wife iso he could board a flight.
The man, who has been publicly identified only by the initials « DW, » boarded a Citilink domestic flight from Jakarta to Ternate while wearing a niqab that covered him from head to toe, reported CNN affiliate CNN Indonesia.
A flight attendant reportedly told authorities that she saw « DW » go into an airplane bathroom, then come out wearing men’s clothes instead of his disguise.

3. Canada will finally opens its borders next month

A closed border crossing in Surrey, Canada, in March 2020.
Liang Sen/Xinhua/Zuma Press
The 16-month wait is over. Beginning August 9, fully vaccinated citizens and permanent residents of the United States currently residing in the US will be permitted to enter Canada.
International travelers may also be allowed to enter Canada beginning September 7, provided the « Covid-19 epidemiology remains favorable, » the Canadian government said in a statement on Monday.
Entry to Canada will continue to be prohibited for all foreign travelers who are not fully vaccinated.

From August 1, no one will be allowed in any French bar, restaurant, shopping mall, concert hall or any long-distance train or airplane without a « sanitary pass » attesting to full vaccination or a recent negative Covid test. Violators could face fines of up to 45,000 euros ($53,000) and a year in jail.
Last week marked a record in terms of France’s vaccination appointment bookings, with around 3.7 million French people signing up to get vaccinated, according to a tweet from medical booking site Doctolib on Monday.
Italy will be rolling out a similar pass on August 6 which will be required to access bars, restaurants, museums and more.

5. England has lifted lockdown, but cases are still rising

People party at The Piano Works in Farringdon, London, on July 19 — England’s so-called « Freedom Day. »
Alberto Pezzali/AP
England, the most populous of the UK’s four countries, lifted almost all of its remaining coronavirus-related restrictions on Monday, on what was dubbed by the British media as « Freedom Day. »
While most of the UK’s adult population is now doubly vaccinated, the number of cases is rising fast. England is the only UK nation to have made the leap to leave lockdown.
Proof of double vaccination against Covid-19 will be required in England for entrance into nightclubs and venues with large crowds by the end of September, but currently, they are open to all.

Wildlife officials in Arizona got a big surprise when they found out the marmot they trapped had traveled to the Phoenix area all the way from Crested Butte, Colorado.
A marmot named Fork made an epic 600-mile trip from Colorado to Phoenix by hitching a ride under a car.
The plucky ground squirrel made it all the way from Crested Butte to Phoenix, a journey Arizona wildlife officials estimate to have taken about 10 hours.
She was tracked by her ear tag number and has been safely returned to her flock in Colorado.

8. Revenge is good, but road trips are better

Three young women say they found out that they’d all been dating the same guy, each believing they were in an exclusive relationship.
So Bekah King, Abi Roberts and Morgan Tabor took the best possible course of action. they dumped the dude, became BFFs, and now they’re on an epic road trip across the Western United States in a 30-year-old school bus they bought and renovated.
As sweet justice goes, it sure beats putting fish down the back of a radiator.

9. Paneled walls are good, but panoramas are better

Nap under a blue Caribbean sky at Four Seasons Resort & Residences Anguilla.
Christian Horan Photography/Courtesy Four Seasons Anguilla
There’s nothing quite like a global pandemic for getting us hankering for some wide open spaces and gulps of fresh clean air.
A roundup by CNN Travel this week of luxury hotel rooms where you can sleep outdoors offers the perfect mix of pampering and panoramas.
Whether you’re looking for a Caribbean escape or starry nights on Kenyan savannah’s, Juliet Izon’s list has you covered.
CNN’s Paul Devitt, Alaa Elassar, Julia Hollingsworth, Juliet Izon, Lilit Marcus, Luke McGee, Paula Newton, Francesca Street, Angus Watson, Barbara Wojazer and Xiaofei Xu contributed to this story.
-- Publicité